The Buffalo Trace distillery is a huge facility located on the outskirts of Frankfort, KY.

Buffalo Trace don’t take part in the officially endorsed ‘Kentucky Bourbon Trail’, preferring to stand alone. It’s not like they need the marketing assist after all, as they produce the now-legendary Pappy Van Winkle line of whiskey, which is so ridiculously in-demand and in short supply that bottles exchange hands for many times their true retail price - that is, if you can even find any at all.

They also produce an annual release (in October, I understand) of their ‘Antique Collection’, which are five exceptional aged whiskies which typically sell out on day of release within minutes, rather like Glastonbury tickets. Not enough with this, they also make a number of other very fine whiskies - including EH Taylor, Blanton’s and Eagle Rare, and are very much the darlings of the Bourbon cognoscenti.

Sadly, there’s not an abundance of this stuff in the distillery shop, just their mainline brands, and the baseline Eagle Rare and Blanton’s offerings. The good stuff is kept locked, behind glass, in a display cabinet. Just one bottle of that 23 Year Old Pappy, please, sir! Please! Denied.

Anyway, we took their so-called “Hard Hat” tour, which gets you behind the scenes access to their distillery, fermentation and aging facilities. You aren’t actually issued a hard hat and hi-viz, but you are sent up some pretty steep staircases, narrow corridors and high places and it is a very ‘industrial’ tour. If you’re sketchy about heights you might have a problem with the iron grill floorings and staircases, though everything is very safe and secure.

The tour is refreshingly unabashed in its simplicity and its approach - it’s very matter-of-fact, though delivered with passion and enthusiasm from our guide, but with no airs or graces. This is the way they’ve done it for years, so this is the way that it’s done.

For example; at one point, our guide explains how they allow fermentation to happen in open vessels, exposed and open to the world, showing us the vast fermentation tanks with batches at varying states of activity. A side-effect of this is that all this tasty nectar bubbling around will inevitably attract insects and intruders. 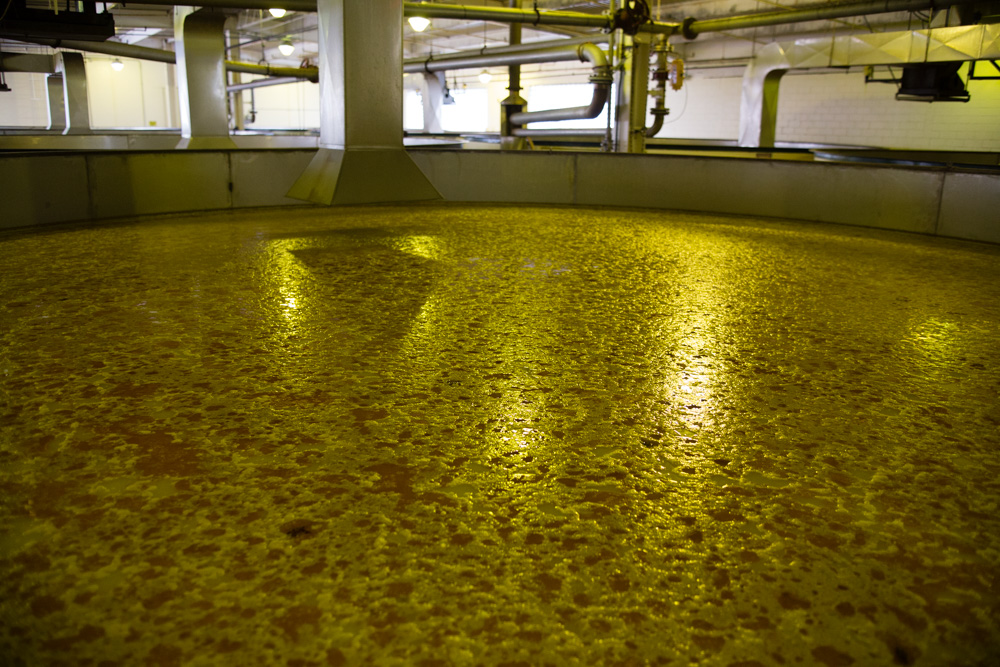 And so, at Buffalo Trace, inside these fermenting tanks with yeast-activated mash bubbling away, there are some relatively large (at least to my British eyes) insect and cockroach corpses dancing around lifelessly on the surface. We don’t see this in the mash tuns at any other distillery we visit. I’m sure it happens everywhere else too, but maybe the other distilleries - some of which are far more polished and on corporate message - hook these out before they let punters wander around the brewhouse? I’m not at all bothered about it, and am glad for the realism - and we learn that the produced liquid will go through a filtration and distillation process which occurs at such a high temperature that no bug or germ could ever survive it. I guess it also means yer Pappy isn’t going to be labelled as Vegan-friendly anytime soon!

The facility is eerily quiet, as they’re not actively distilling the day we visit, which is unfortunate, but it does allow us to see the inner workings of what is a very traditional, and largely un-modernised process. Wheat hoppers are controlled by ropes and pulleys, nothing is shiny and new - vessels and piping and containers are all aged and battered. It’s kind of like your granddad’s garage, just scaled up a few notches. I like it a lot. 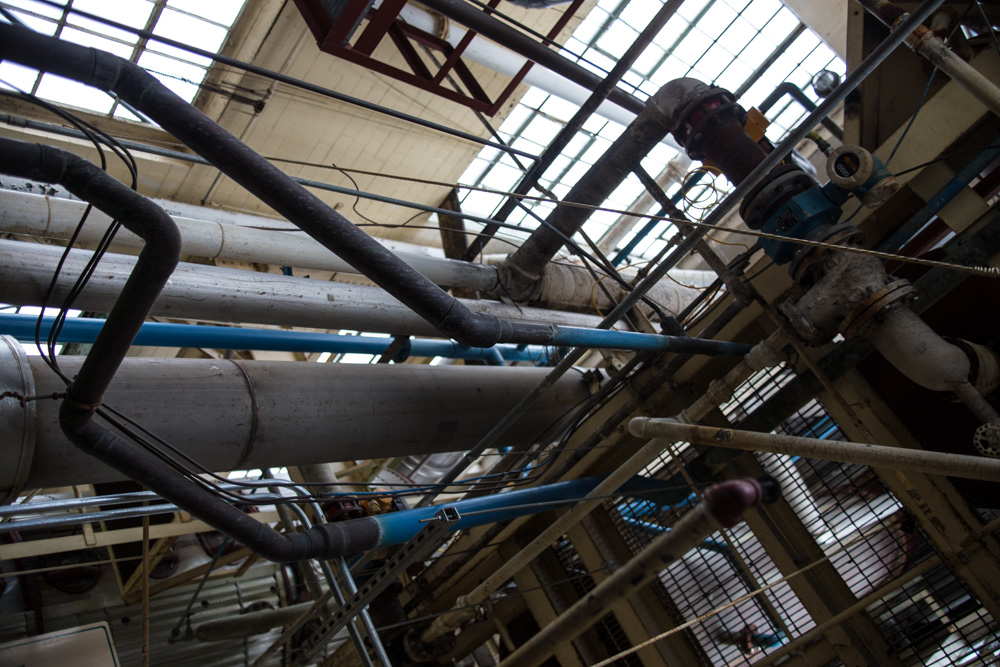 Here is also where we experience our first rickhouse - and that unforgettable smell! I wish I could adequately describe the scent of a rickhouse full of maturing bourbon - it is sweet, pungent and comforting. Even if you weren’t a whiskey fan, the smell of the wood and the spirit is something to savour. The smell comes from the whiskey evaporating through the oak barrels, or - the “Angel’s Share”, if you want to get all doe-eyed about it. 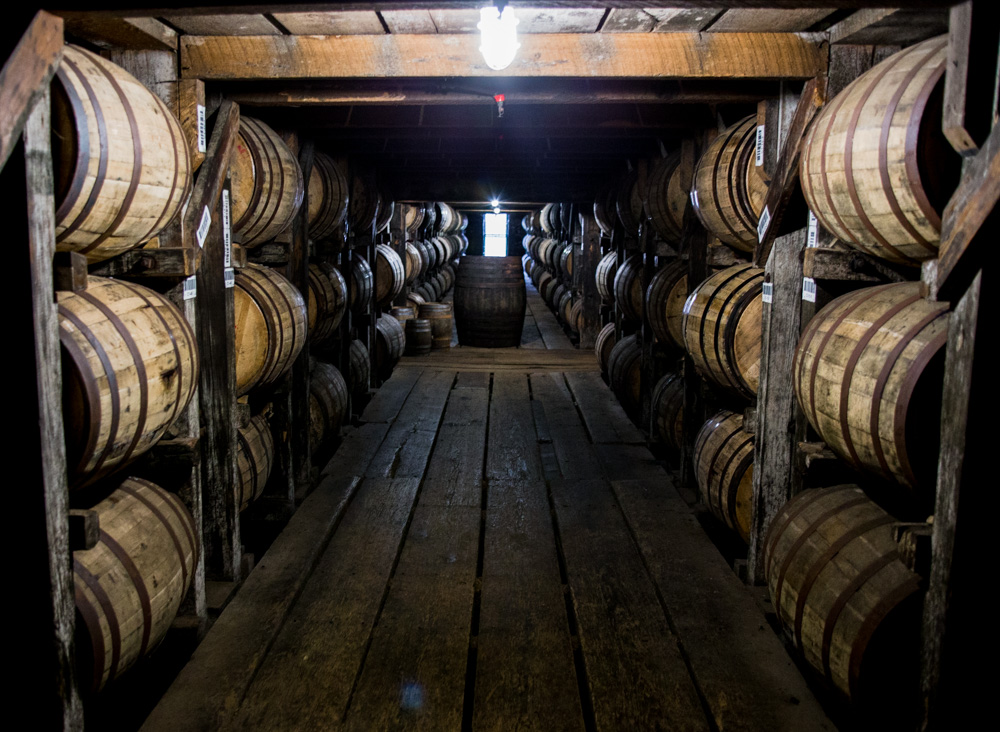 The distillery - like all of the open-to-public ones - offer a tasting of their products following your tour. This might sound surprising because most of the distilleries are in relatively rural locations, and realistically require a car to visit. However, you’re given only the tiniest snoot to sample (I’d guess perhaps 1/4th of a regular UK pub measure), so it’s highly unlikely you’d end up even remotely tipsy after a session.

We tasted the regular Buffalo Trace - which is a perfectly decent and inexpensive bourbon and Eagle Rare (the regular 10 Year old version) - which is usually a mite more expensive, and relatively uncommon in the UK. We’re also offered a vodka they’re seemingly hawking - which we pass, and a Bourbon Creme liqueur which is pretty much Baileys-but-with-Bourbon. It’s sweet and thick and would probably rock your world if you shoved it in a coffee, but it’s not for me. I find it a bit weird that they foist the vodka and cream on you, given that I believe neither are produced at this facility - but I guess, as I mentioned earlier, Buffalo Trace don’t need any help selling their product.

The distillery is a great introduction for us - a taster of what was to come over the forthcoming next few days. Onwards!